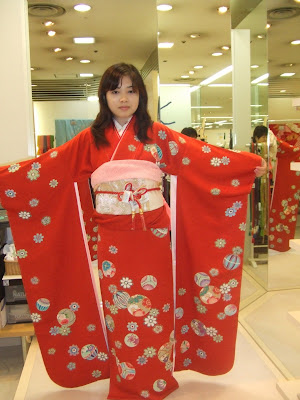 (Japanese: 着物, literally “something worn”, i.e., “clothes”) are the traditional garments of Japan. Originally kimono was used for all types of clothing, but it came to refer specifically to the full-length garment that is still worn by women, men, and children.

Kimono are T-shaped, straight-lined robes that fall to the ankle, with collars and full-length sleeves. The sleeves are commonly very wide at the wrist, perhaps a half meter. Traditionally, on special occasions unmarried women wear kimono with extremely long sleeves that extend almost to the floor. The robe is wrapped around the body, always with the left side over the right, and secured by a wide belt tied in the back, called an obi. Kimono are generally worn with traditional footwear (especially geta, thonged wood-platform footwear; and zori, a type of thong-like footwear) and split-toe socks called tabi. Beneath the outer kimono, another shorter kimono is worn as underwear, called a nagajuban.

The kimono was mainly influenced by the Chinese Hanfu through extensive cultural exchanges between the two countries starting in the 5th century ce. The modern kimono began to take shape during Japan’s Heian period (794–1192 ce). Since then, the basic shape of both men’s and women’s kimono has remained essentially unchanged.

Traditionally, all women’s kimono are one size; wearers tuck and fold the fabric to create the fit appropriate for their body. Kimono are made from a single bolt of kimono fabric. The bolts come in standard dimensions, and all the fabric is used in the making of the kimono. All traditional kimono are sewn by hand, and the fabrics from which they are created are also frequently hand made and hand decorated. Various techniques such as yuzen dye resist (made with a kimono which governs where the pattern is distributed and if it is a singular or a repeating pattern. Repeating patterns that cover a large section of the kimono are traditionally done with the yuzen resist technique and a stencil.

In the past, a kimono would often be entirely taken apart for washing, and then re-sewn for wearing. Modern fabrics and cleaning methods have been found that eliminate this need. However, the washing of kimono in the traditional way can still be found. Basting stitches—long, loose stitches—are sometimes placed around the outside edges of the kimono for storage. They help to prevent bunching, folding and wrinkling, and keep the kimono’s layers in alignment.

Over time there have been many variations in color, fabric and style, as well as accessories such as the obi.

There are styles of kimono for various occasions, ranging from extremely formal to very casual. The level of formality of women’s kimono is determined mostly by the pattern and fabric, and also the color. Young women’s kimono have longer sleeves and tend to be more elaborate than similarly formal older women’s kimono. Men’s kimono are usually one basic shape and are mainly worn in subdued colors. Formality is also determined by the type and color of accessories, the fabric, and the number or absence of kamon (family crests). Silk is the most desirable, and most formal, fabric. Cotton is more casual. These days there are polyester kimono as well; they are generally more casual.

Today, both men’s and women’s kimono are increasingly available in different sizes. With the tradition of kimono being made from a single bolt of cloth, larger sizes are difficult to find and very expensive to have made. Very tall or heavy people, such as sumo wrestlers, have kimono custom-made.

Kimono can be expensive. A woman’s kimono may easily exceed US$10,000; a complete kimono outfit, with kimono, undergarments, obi, ties, socks, sandals and accessories, can exceed US$20,000. A single obi may cost several thousand dollars. In practice, however, most kimono owned by typical kimono hobbyists or by practitioners of traditional arts are far less expensive. Enterprising people make their own kimono and undergarments since they follow a standard pattern, or they recycle older kimono. Cheaper and machine-made fabrics substitute for the traditional hand-dyed silk. There is also a thriving business in second-hand kimono in Japan, and second-hand kimono can cost as little as 500 yen. Women’s obi, however, mostly remain an expensive item. Although simple patterned or plain colored ones can cost as low as 1500 yen, they can cost hundreds of dollars, and they are difficult for inexperienced people to make. Men’s obi, even those made from silk, tend to be much less expensive, because they are narrower and shorter than those worn by women.

Kimono are never wasted. Old kimono are recycled in various ways: they may be altered to make haori, hiyoku, or kimono for children; the fabric may be used to patch similar kimono; larger pieces of fabric may be used for making handbags and other similar kimono accessories; and smaller pieces can be used to make covers, bags or cases for various implements, especially things like the sweet-picks used in tea ceremony. Kimono with damage below the waistline can also be worn under hakama to hide the damage. There were even those skilled in laboriously unpicking the silk thread from old kimono and reweaving it into a new textile in the width of a heku obi for men’s kimono, this recycling weaving method is called Saki-Ori.

Today, kimono are usually worn only on special occasions, and mostly by women. A few older women and even fewer men still wear kimono on a daily basis. Men wear kimono most often at weddings and for the tea ceremony. Kimono are also worn by both men and women in certain sports, such as kendo. Professional sumo wrestlers frequently wear kimono because they are required to wear traditional Japanese dress whenever appearing in public outside the ring.

There are many kimono hobbyists in Japan, where people can even take courses on how to put on and wear kimono. Classes cover selecting seasonally and event-appropriate patterns and fabrics, matching the kimono undergarments and accessories to the kimono, layering the undergarments according to subtle meanings, selecting and tying obi, and other topics. There are also clubs devoted to kimono culture, such as Kimono de Ginza.

Modern kimono are not the elaborate affairs they used to be. Kimono worn for festivals and other informal events can be only two layers, or one with a false under collar and a slip. These informal kimono are worn with a simple patterned or single colored obi. Full formal kimono are most often only worn by brides, geisha, or hostesses, or for very formal events.

Most Japanese women would be unable to properly put on a traditional kimono unaided, since the typical woman’s outfit requires twelve or more separate pieces that must be worn, matched and secured in prescribed ways. Professional kimono dressers still help women put on kimono, usually for special occasions. Kimono dressers must be licensed, and while they often work out of hair salons, many make house calls as well.

The choice of which type of kimono to wear is laden with symbolism and subtle social messages. The specific choice relates to the woman’s age and marital status, and the level of formality of the occasion. In descending order of formality:

The pattern of the kimono can also determine in what season it should be worn. For example, a pattern with butterflies or cherry blossoms would be worn in spring or summer. A popular autumn motif is the russet leaf of the Japanese maple; for winter, designs may include bamboo, pine trees and ume blossoms.

In contrast to the woman’s garment, men’s kimono outfits are far simpler, typically consisting of a maximum of five pieces, not including socks and sandals.

A noticeable difference between men and women’s kimono is the sleeves, these are completely attached to the body of the kimono or no more than an inch or three unattached at the bottom, whereas women’s have very deep sleeves and most of their depth is unattached from the body of the kimono. Men’s sleeves are less deep than women’s kimono sleeves because an obi has to fit round the waist beneath them, whereas on a woman’s kimono, the long, unattached bottom of the sleeve can hang over the obi without getting in the way of it.

In the modern era, the principal distinctions between men’s kimono are in the fabric. The typical kimono has a subdued, dark color; black, dark blues and greens, and occasionally brown are common. Fabrics are usually matte. Some have a subtle pattern, and textured fabrics are common in more casual kimono. More casual kimono may be of slightly brighter color, such as lighter purples, greens and blues. Sumo wrestlers have occasionally been known to wear quite bright colors such as fuchsia.

The most formal style of kimono is plain black with five kamon on the chest, shoulders and back. Slightly less formal is the three-kamon kimono. These are usually paired with white undergarments and accessories.

Almost any kimono outfit can be made more formal by adding hakama and haori (see below).

This article is licensed under the GNU Free Documentation License. It uses material from the Wikipedia article “Kimono”