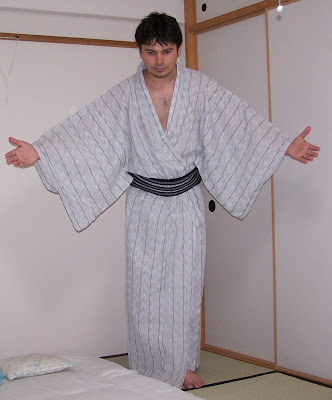 Yukata (Japanese: ??) is a Japanese summer garment. People wearing yukata are a common sight at fireworksdisplays, bon-odori festivals, and other summer events. The yukata is a casual form of kimono that is also frequently worn after bathing at traditional Japanese inns. Though their use is not limited to after-bath wear, yukata literally means bath(ing) clothes.
Fabrics and styles
A yukata is a cooling garment to wear. Like other forms of clothing based on traditional Japanese garments, it is made with straight seams and wide sleeves. Unlike formal kimono, yukata are typically made of cotton rather than silk or synthetic fabric, and they are unlined.
Traditionally yukata were mostly made of indigo-dyed cotton but today a wide variety of colors and designs is available. Like the more formal kimono, the general rule is the younger the person, the brighter the color and bolder the pattern. A child might wear a multicolored print and a young woman, a floral print, while an older woman would confine herself to a traditional dark blue with geometric patterns. Since the late 1990s, yukata have experienced a bit of a revival, and many young women now wear them in summer in personally distinctive ways not limited by tradition.
Wearing a yukata
The proper way to wear a yukata is not necessarily obvious. An obi (belt) is used to keep the yukata from falling open when worn in public. In private, as after a bath, the yukata is usually simply belted. Also, a type of thonged wooden sandal called geta is usually worn with the yukata.
Amongst men, the most common use of yukata in public is when it is worn by sumo wrestlers. Junior ranked sumo wrestlers are expected to wear yukata when out in public, irrespective of the weather conditions or time of year. During the summer all wrestlers tend to wear this attire.
Both men and women often wear yukata at traditional Japanese hotels, especially ones with their own onsen. After checking in, people often change into the yukata provided by the hotel. Many go for walks outside, to the public baths, and even to dinner and breakfast (taken in a communal dining room) in their yukata.
This article is licensed under the GNU Free Documentation License. It uses material from the Wikipedia article “Yukata”.

One Response to Japanese flavour – Yukata