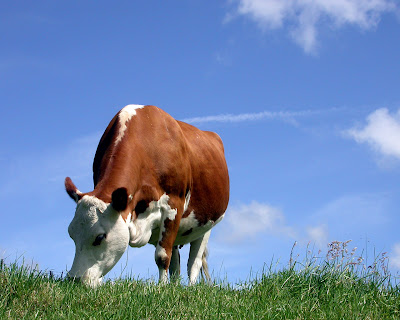 Happy cows give more milk
By Komfie Manalo – All Headline News Foreign Correspondent
Romanesti, Romania (AHN) – This was the belief of five Romanian farmers who are now subject of police investigation after they were found to have been feeding cannabis to their cows.
The farmer aged between 57 and 82, claiming they didn’t know they were doing something illegal by growing the drug in their field, tod the police officers that the drug actually help the cows in producing more milk.
One of the farmers, Ion Astarastoaie said: “We grew it because the cows seemed to like it, and happy cows give more milk.”
Also see this funny reporting :
Marijuana: The new bovine growth hormone?
From: http://www.jaunted.com/
“We don’t want to give you the impression that Eastern Europe is obsessed with alcohol and sex, but we do need to tell you about the latest drug-takers in the region. Farmers in the north-western Romanian town of Romanesti were approached by police this week who gave them a good telling-off for feeding their cows cannabis.
The five men involved were aged from 57 to 82, and pleaded with the cops that they really weren’t trying to break the law. The explanation was as simple as this:
We grew it because the cows seemed to like it, and happy cows give more milk.
What nice guys! We’re not so sure they’re telling the whole truth, though. Aren’t they just looking for an easier way to make pot butter?”
Sometimes I miss it … all this funny, crazy life that never stop rethinking the impossible.

One Response to Romanian flavour – Happy cows give more milk