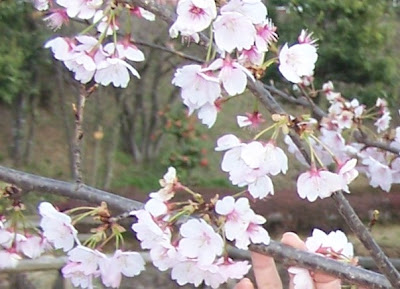 Sakura or Cherry Blossom (Japanese kanji & Chinese character: ? or ?; hiragana: ???; katakana: ???) is the Japanese name for ornamental cherry trees, Prunus serrulata, and their blossoms. Cherry fruit (known as sakuranbo) come from a different species of tree.

Sakura, a well-known and ubiquitous symbol of Japan, are represented on all manner of consumer goods, including kimono, stationery, and dishware. Cherry blossoms are an enduring metaphor for the ephemeral nature of life, and as such are frequently depicted in art. There is at least one popular folk song, originally meant for the shakuhachi (bamboo flute), titled “Sakura“, as well as a number of pop songs. “Sakura” is also a common Japanese female name.

Sakura is indigenous to the Himalayas and in east Asia such as China, Korea and Japan. Japan has a wide variety of sakura, more than 305 species, can be seen in Japan. This is due to the fact that many of them were artificially hybridized or grafted by the Japanese many centuries ago.

Japan’s most beloved variety is the Somei Yoshino. Its flowers are nearly pure white, tinged with the palest pink, especially near the stem. The flowers bloom, and usually fall (or “scatter”, ?? [chiru], in Japanese) within a week, before the leaves come out. Therefore, the trees look nearly white from top to bottom. The variety takes its name from the village of Somei (now part of Toshima in Tokyo). It was developed in the mid- to late-19th century at the end of the Edo period and the beginning of the Meiji period. The Somei Yoshino is so widely associated with cherry blossoms that jidaigeki and other works of fiction often depict the variety in the Edo period or earlier; such depictions are anachronisms.

Other categories include yamazakura, yaezakura, and shidarezakura. The yaezakura have large flowers, thick with rich pink petals. The shidarezakura, or weeping cherry, has branches that fall like those of a weeping willow, bearing cascades of pink flowers.

Annually, the Japanese Meteorological Agency and general public track the sakura zensen, or Cherry-Blossom Front. Nightly forecasts follow the weather segment of news programs. The blossoming begins in Okinawa in January, and typically reaches Kyoto and Tokyo at the end of March or the beginning of April. Then it proceeds north, arriving in Hokkaid? a few weeks later. Japanese pay close attention to these forecasts. They will go to parks, shrines and temples with family and friends and hold a “flower viewing party” known as hanami (??). Hanami festivals celebrate the beauty of sakura, and for many, it is a chance to relax and enjoy the beautiful view. Hanami custom in Japan dates back to many centuries ago. It is witten in Nihon Shoki (????) that the Hanami festival were already held in the 3rd century.

Most Japanese schools and public buildings have sakura trees outside of them. Since the fiscal and school year both begin in April, in many parts of Honsh?, the first day of work or school will coincide with the cherry blossom season. 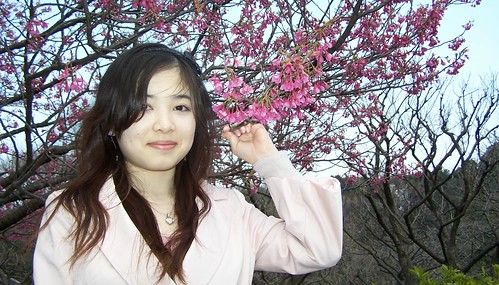